CAD $4.5B was invested across 196 deals in Q1, the second-highest quarterly VC (CAD $5.2B, Q22021) investment on record. While investment value remains on par with 2021 levels, VC deal count in Q1 experienced the third consecutive quarter-over-quarter decline.

The average disclosed deal size in Q1 was CAD $28.4M, surpassing the five-year average of CAD $12.7M. There were 17 mega deals (+$50M) valued at CAD $3.3B and accounting for nearly three-quarters of all dollars invested, including four deals valued above CAD $200M. Deals of note in Q1 include Toronto-based 1Password’s CAD $775M raise from U.S.-based investors, and Montreal-based Paper’s CAD $342 Series D from Framework Venture Partners and BDC Capital.

“We’re seeing the lingering effects of 2021’s recording-breaking VC performance,” said Kim Furlong, Chief Executive Officer, CVCA. ​“There are several variables at play including inflation, geopolitics, and the dollars from the last Venture Capital Catalyst Initiative (VCCI) have been allocated which could impact capital deployment moving forward. These forces all impact investment performance. We will continue to monitor as we head towards H1.”

The exit environment in Q1 saw 12 exits with no IPOs for a total of CAD $186M. A notable exit in Q1 was Ontario-based Inkbox’s acquisition by BIC for CAD $81M. 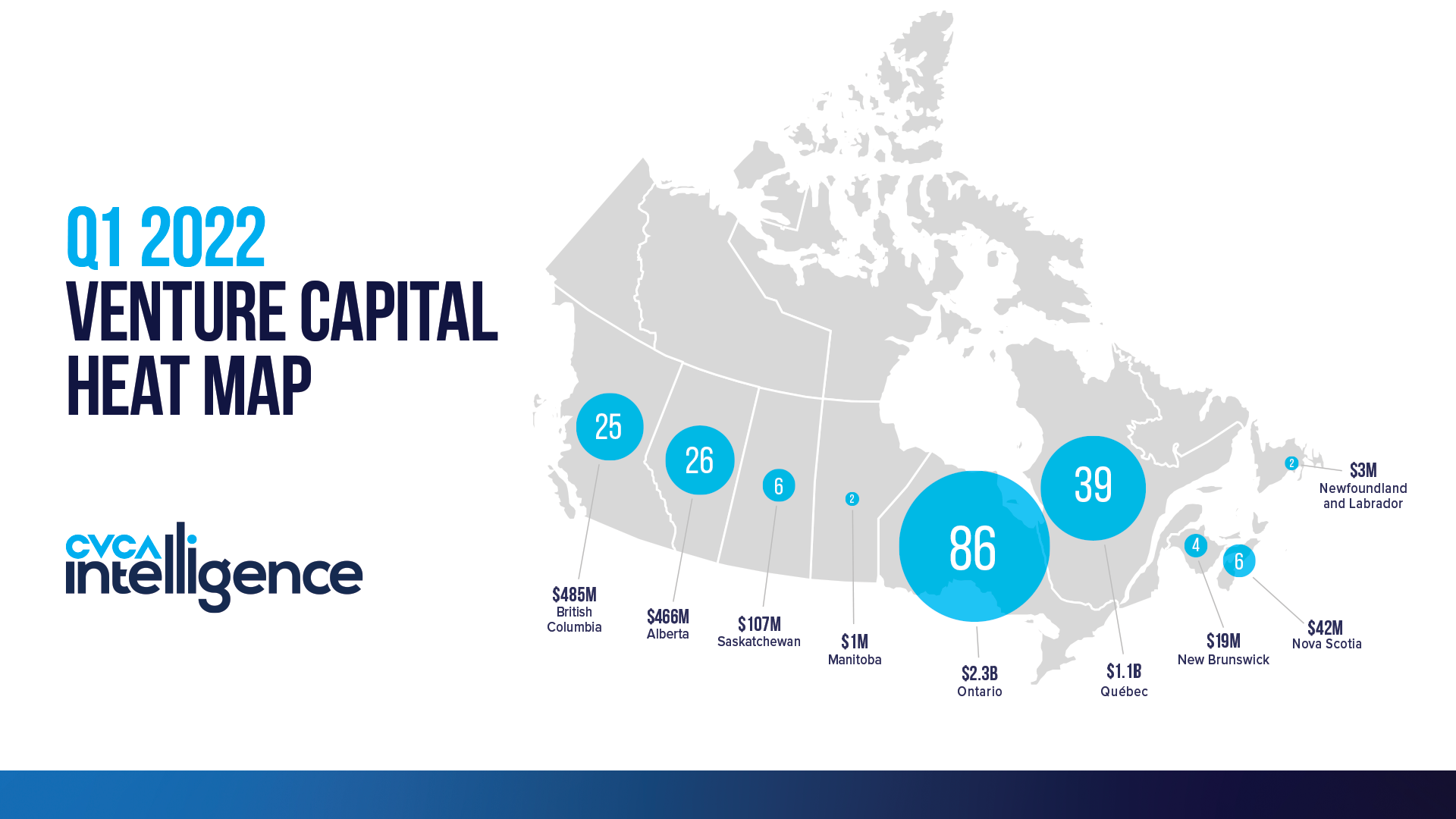 CAD $1.4B of private equity was invested across 212 deals in the first quarter of 2022. This is the second highest number of deals for a single quarter on record (215 in Q42021). The absence of large and mega-deals contributed to a decline in total deal value in Q1.

Out of the 212 deals that closed in Q12022, 92% of the deals (121) with disclosed values were under CAD $25M, and the average PE deal size continues to decrease. Deals under CAD $25M continue to make up the largest percentage of the Canadian PE market, underscoring the importance of PE investing into Canadian small and medium-sized businesses (SMEs).

“There are a few observations of note for private equity investment in Q1,” said Kim Furlong, Chief Executive Officer, CVCA. ​“First, we’re seeing similar PE market trends globally, particularly in the United States and European markets. In Q1, the US similarly experienced a decline in the total deal value. Second, there are several issues becoming factors in investment decisions, including inflation, valuation adjustments, the war in Ukraine, and geopolitical forces.” 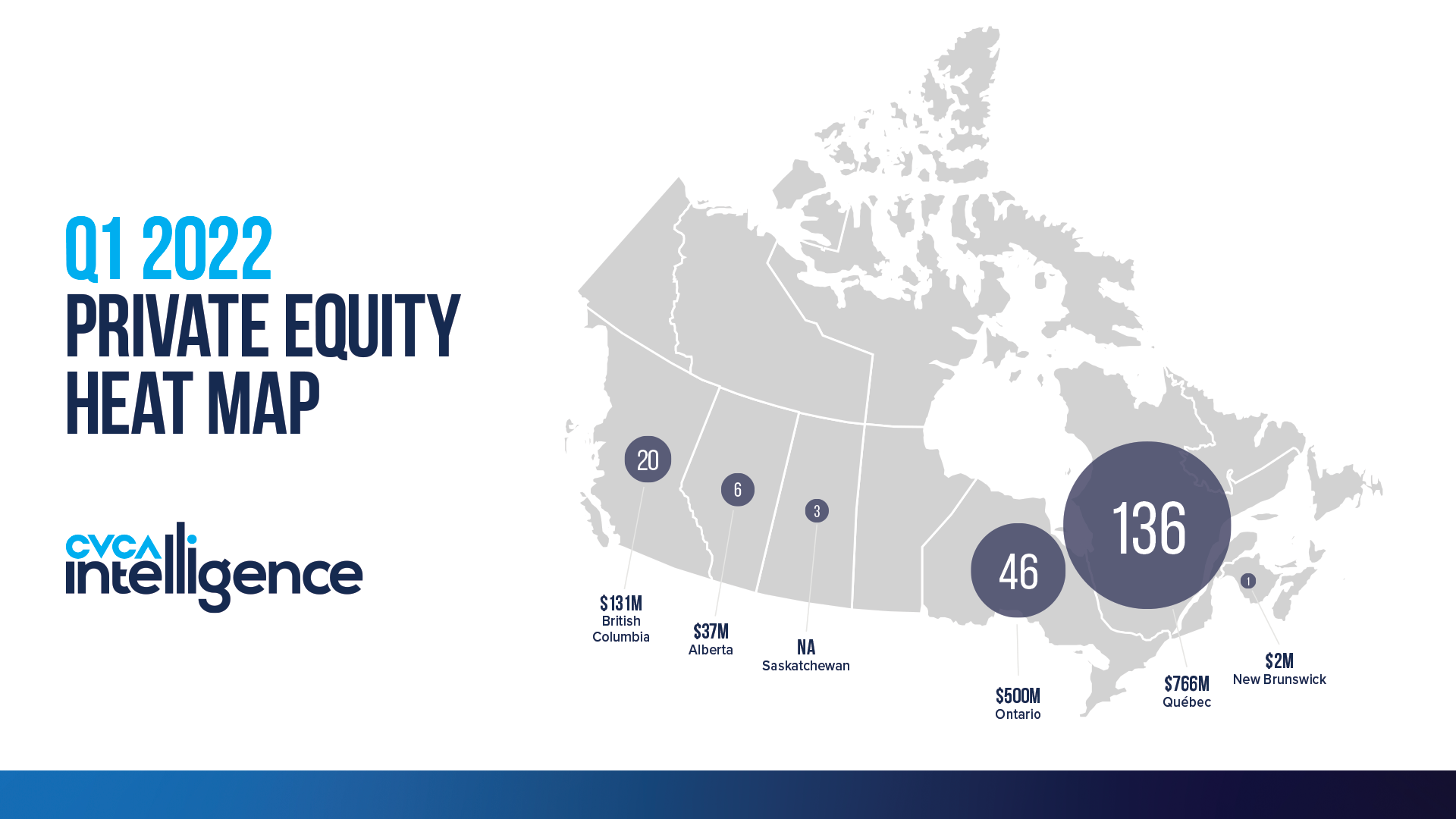 For a deeper look into the performance of Q1 as well as the trends uncovered in 2021, the Canadian private capital industry will be gathering for CVCA’s Invest Canada ​’22 from May 25 – 27 in Ottawa. This year, there are several expert-led panels dedicated to exploring current themes. For more information, visit the Invest Canada website.

Files in this Report